- Design and analysis of quantitative data 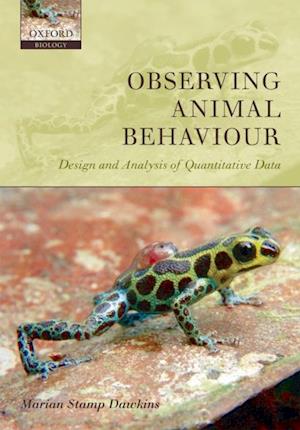 This book introduces the reader to the power of observation before, and sometimes instead of, experimental manipulation in the study of animal behaviour. It starts with simple and easily accessible methods suitable for student projects, before going on to demonstrate the possibilities that now exist for far more sophisticated analyses of observational data. At a time when animal welfare considerations are attracting political as well as scientific debate, thepotential for non-intrusive studies on animals is being increasingly recognized. Observation emerges as a valuable alternative approach, often yielding highly informative results in situations (such as on zoos, farms or for wild animals) where more invasive experimental techniques would be undesirable,unethical or just plain impossible. However, to justify its place alongside experimentation as a rigorous scientific method, observation needs to be just as disciplined and systematic and have just as much attention paid to project design in the way that observations are made and recorded. Observing Animal Behaviour takes the reader through all these stages: from the initial observations, to the formulation of hypotheses, and their subsequent testing with further systematic observations. Although designed principally as a companion text for advanced undergraduate and students taking courses in animal behaviour, this accessible text will be essential reading for anyone wanting to study animal behaviour using observational methods rather than experimentation, and assumes noprevious knowledge of animals, statistics or scientific method. It will be of particular relevance and use to those professional researchers and consultants in the behavioural sciences who seek a compact but comprehensive introduction to the quantitative observation of animal behaviour.