indgår i serie Lecture Notes in Applied and Computational Mechanics 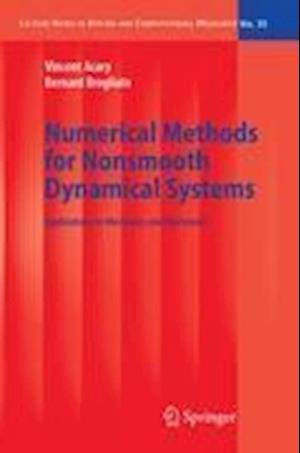 This book concerns the numerical simulation of dynamical systems whose trajec- ries may not be differentiable everywhere. They are named nonsmooth dynamical systems. They make an important class of systems, rst because of the many app- cations in which nonsmooth models are useful, secondly because they give rise to new problems in various elds of science. Usually nonsmooth dynamical systems are represented as differential inclusions, complementarity systems, evolution va- ational inequalities, each of these classes itself being split into several subclasses. The book is divided into four parts, the rst three parts being sketched in Fig. 0. 1. The aim of the rst part is to present the main tools from mechanics and applied mathematics which are necessary to understand how nonsmooth dynamical systems may be numerically simulated in a reliable way. Many examples illustrate the th- retical results, and an emphasis is put on mechanical systems, as well as on electrical circuits (the so-called Filippov's systems are also examined in some detail, due to their importance in control applications). The second and third parts are dedicated to a detailed presentation of the numerical schemes. A fourth part is devoted to the presentation of the software platform Siconos. This book is not a textbook on - merical analysis of nonsmooth systems, in the sense that despite the main results of numerical analysis (convergence, order of consistency, etc. ) being presented, their proofs are not provided.