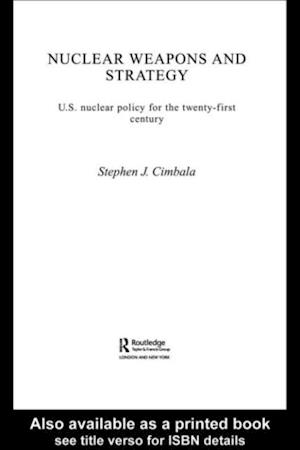 Nuclear weapons, once thought to have been marginalized by the end of the Cold War, have returned with a vengeance to the centre of US security concerns and to a world bereft of the old certainties of deterrence. This is a major analysis of these new strategic realities. The George W. Bush administration, having deposed the regime of Saddam Hussein in Iraq, now points to a new nuclear 'Axis of Evil': Iran and North Korea. These nations and other rogue states, as well as terrorists, may pose key threats because they are 'beyond deterrence', which was based on the credible fear of retaliation after attack. This new study places these and other developments, such as the clear potential for a new nuclear arms race in Asia, within the context of evolving US security policy. Detailing the important milestones in the development of US nuclear strategy and considering the present and future security dilemmas related to nuclear weapons this is a major new contribution to our understanding of the present international climate and the future. Individual chapters are devoted to the key issues of missile defenses, nuclear proliferation and Israel's nuclear deterrent. This book will be of great interest to all students and scholars of strategic studies, international relations and US foreign policy.