Noun Phrase in the Generative Perspective 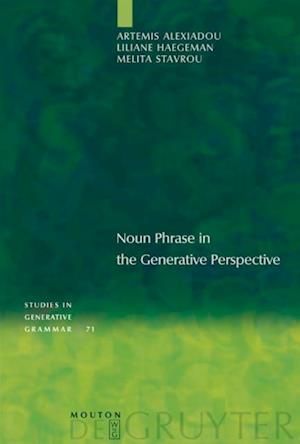 The goal of this book is twofold. On the one hand we want to offer a discussion of some of the more important properties of the nominal projection, on the other hand we want to provide the reader with tools for syntactic analysis which apply to the structure of DP but which are also relevant for other domains of syntax. In order to achieve this dual goal we will discuss phenomena which are related to the nominal projection in relation to other syntactic phenomena (e.g. pro drop will be related to N-ellipsis, the classification of pronouns will be applied to the syntax of possessive pronouns, N-movement will be compared to V-movement, the syntax of the genitive construction will be related to that of predicate inversion etc.). In the various chapters we will show how recent theoretical proposals (distributed morphology, anti-symmetry, checking theory) can cast light on aspects of the syntax of the NP. When necessary, we will provide a brief introduction of these theoretical proposals. We will also indicate problems with these analyses, whether they be inherent to the theories as such (e.g. what is the trigger for movement in antisymmetric approaches) or to the particular instantiations. The book cannot and will not provide the definitive analysis of the syntax of noun phrases. We consider that this would not be possible, given the current flux in generative syntax, with many new theoretical proposals being developed and explored, but the book aims at giving the reader the tools with which to conduct research and to evaluate proposals in the literature. In the discussion of various issues, we will apply the framework that is most adequate to deal with problems at hand. We will therefore not necessarily use the same approach throughout the discussion. Though proposals in the literature will be referred to when relevant, we cannot attempt to provide a critical survey of the literature. We feel that such a survey would be guided too strongly by theoretical choices, which would not be compatible with the pedagogical purposes this book has. The book is comparative in its approach, and data from different languages will be examined, including English, German, Dutch (West-Flemish), Greek, Romance, Semitic, Slavic, Albanian, Hungarian, Gungbe.