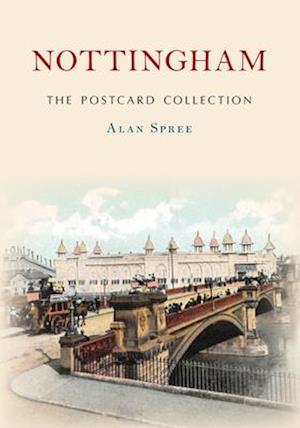 Nottingham was established as a settlement even before the Normans built their castle there, but the castle became an important stronghold and the medieval town grew around both it and the original settlement in today's Lace Market area. The castle was later rebuilt but some remains of medieval Nottingham can still be found today, including two of the oldest public houses in the country, Ye Olde Salutation Inn and Ye Olde Trip to Jerusalem. Lacemaking and other industries later left their mark on the city, and the nineteenth century and early twentieth century was an era of great civic pride in the city as the Council House was built, major railway stations and theatres opened and the city expanded its boundaries.In Nottingham: The Postcard Collection author Alan Spree has drawn on a remarkable selection of old postcards to give a pictorial record of life in Nottingham from the late nineteenth century to the early 1950s. Although much of Nottingham has changed over the years, many landmarks have remained and will be familiar today. The postcards show the changes to Nottingham's fabric and its community adapting and changing over the course of this period. This fascinating collection of images will be of interest to those who have lived in Nottingham or know it well.