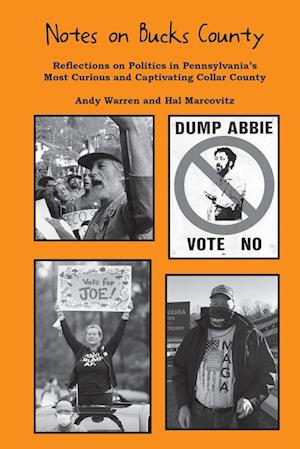 Reflections on Politics in Pennsylvania's Most Curious and Captivating Collar County

A public works project that exploded into protests, mass arrests and political upheaval. A decades-long feud between two of the region's best-known elected officials. Judges who feared their own constitutional rights were being ignored. The travels and travails of two candidates who went on to win statewide office, albeit with more than a few nervous moments along the way. Controversies that were sparked by such diverse issues as the drugging of racehorses, a nuclear freeze resolution and who exactly was it that spilled water on First Lady Barbara Bush. And, of course, a look at the 2020 election.

These are among the issues authors Andy Warren and Hal Marcovitz examine in Notes on Bucks County. At one time, Bucks County, Pennsylvania, was known for its lush farmlands, charming small towns, covered bridges and as a home to authors, artists and other celebrities. Over the past 75 years, the county has emerged as a sprawling suburban community that has found itself playing an important role in regional, state and national politics. Indeed, readers of Notes on Bucks County will learn that politics in Bucks County can be two-fisted, as local elected officials spar over issues that affect the quality of life for the county's more than 600,000 citizens.

Andy Warren has been involved in Bucks County politics since the 1970s, most notably serving for 15 years as an elected county commissioner. Hal Marcovitz spent 30 years in daily journalism, and for much of that time was assigned to cover the tumultuous politics of Bucks County. They have combined their expertise to analyze the major political events that have occurred in Bucks County over the past 75 years, providing insight for readers who are likely to agree that Bucks County is Pennsylvania's most curious and captivating collar county.