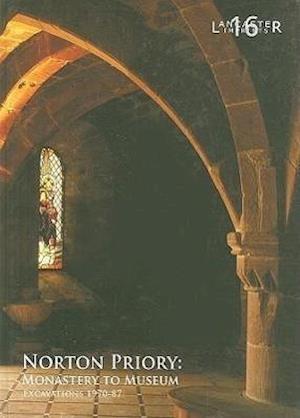 The Priory of St Mary was moved from Runcorn to Norton in 1134 by William fitz William, third baron of Halton. Despite a major fire in 1236, Norton grew in size and stature to become an abbey in 1391, and its abbot was a senior and much respected member of the Augustinian Order. The abbey met its end in April 1536 under Henry VIII's dissolution of religious houses, and in 1545 the site was sold to the Brooke family, who adapted parts of the abbot's quarters, kitchens and west range to provide a comfortable family home. In the mid-eighteenth century, much of the house was demolished to make way for a fashionable classically inspired mansion, which was occupied until 1921 and finally demolished in 1928.In 1966, the site was presented to Runcorn Development Corporation by Sir Richard Brooke. Ground-breaking excavations began in 1970, running until 1987, and exposing much of the site for investigation. The principal excavator, J Patrick Greene, published an excellent synthesis of the site in 1989, but the full stratigraphy and finds from the project remained unpublished.This book, funded by English Heritage, and supported by the Norton Priory Museum Trust, seeks to redress this, with a full account of the results of the excavations. Its production by Oxford Archaeology North drew together a team of specialists from a wide range of disciplines.