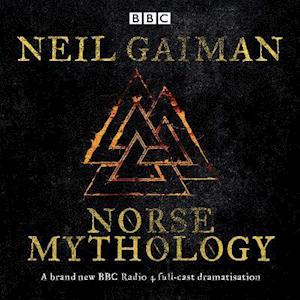 A full-cast dramatisation of Neil Gaiman's magical retellings of the Norse myths, inviting us into a world of gods and monsters, tricks and trust, fiery endings and new beginnings'And the game begins anew...'Meet the trickster god Loki and his astonishing children - the giant wolf Fenrir, Jormungundr the snake that encircles the world, and Hel, the little girl who grows up to be Queen of the dead. Here, too, is Odin the all-father, who sacrificed his eye to see the future; Thor the thunderer, who defends Asgard with his fearsome strength and mighty hammer; and Freya the understandably angry, most beautiful of the gods and always being gambled for by unwanted suitors.From the beginning of the universe in fire and ice, to the very end of the world, Ragnarok, these enthralling tales of gods, goddesses, dwarves and giants bring the ancient myths to vigorous life.Diana Rigg, Derek Jacobi, Colin Morgan, Natalie Dormer and Neil Gaiman himself are among the stellar cast in these spellbinding stories of old betrayals - and new hope.