No Such Thing As Failure

- The Extraordinary Life of a Great British Adventurer 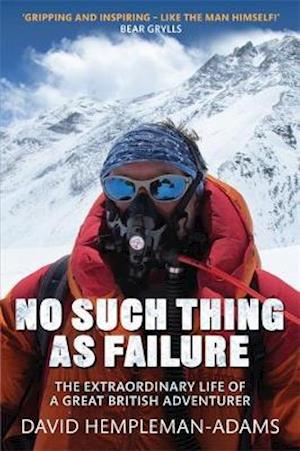 If there's an adventure to be had, it's likely that David Hempleman-Adams has been there first. Ranking alongside Ranulph Fiennes and Chris Bonnington in the pantheon of British explorers, he is the first person in history to achieve what is termed the Adventurers' Grand Slam, by reaching the Geographic and Magnetic North and South Poles as well as climbing the highest peaks on all seven continents. The question Hempleman-Adams is most often asked is, simply: what drives him on? Why risk frostbite pulling a sledge to the North Pole? Why experience the Death Zone on Everest? Why fly in the tiny basket of a precarious balloon across the Atlantic? Is it simply the case that he likes to push himself to the limits, or is there something more to it? No Such Thing as Failure answers these questions and more, uncovering what drives arguably the world's greatest adventurer.

Forfattere
Bibliotekernes beskrivelse `I admire David hugely. He is a true adventurer and this book shows the breadth and depth of his achievements. No Such Thing As Failure is an astonishing book, depicting an awe-inspiring life.' Sir Ranulph Fiennes