- My Life in Basketball or: How a Kid from Queensbridge Survived the Streets, the Brawls, and Himself to Become an NBA Champion 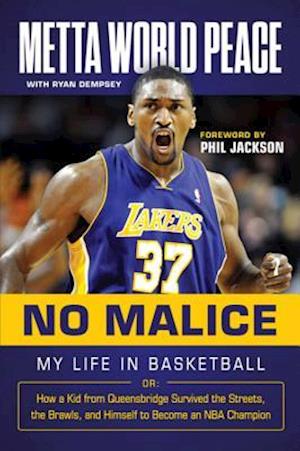 Metta World Peace knows what it means to be both the hero and the villain. In his 17-season professional basketball career, he's darted back and forth between extremes, taking on the roles of youthful phenom, league-wide disgrace, All-Star, unlikely international ambassador, and fan favorite. Along the way, there have been awards, teammate rifts, an NBA championship trophy, plus a name change or two. It's more than the guy born Ronald William Artest, Jr. might have imagined for himself as a kid growing up in Queens. In No Malice , World Peace speaks candidly about his life on and off the court, from his difficult upbringing, to his time as a star athlete and budding math major at St. Johns; from the infamous 'Malice at the Palace' brawl in Detroit, where he earned one of the lengthiest suspensions the NBA has ever handed down, to his sunnier days as a Los Angeles Laker. World Peace also opens up on such diverse subjects as his forays into business and entertainment, the truth behind his volatile, unbelievable antics which have puzzled fans and team management alike, as well as his outspoken advocacy for mental health awareness. No topic is off the table, making this a must-read for hoops fans in Indianapolis, LA, Chicago, China, and any place in between.