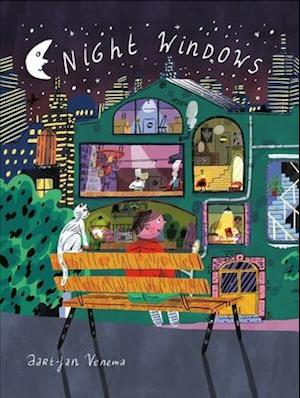 A lonely boy finds his feet in a new city by watching his neighbours' lives unfold behind their lit windows. Adjusting to life in a new city is tough. When a young boy moves from the countryside, everyone around him seems so unfriendly. Lonely and home- sick, he sits on a bench outside his new apartment block and watches the busy urban lives going on behind the lit windows. A writer struggles with writers block, a cook creates magnificent meals for herself, a young woman cultivates a luxuriant garden on her balcony and mum struggles to keep four kids under control. Night after night he watches his neighbours' lives unfold before him, observing the tiny details of each story, until one evening someone else is sitting on his bench. Gradually he begins to interact with the people around him, and decides to throw a big party to bring all the neighbours together.... This is a heartwarming tale about fitting in and making friends, illustrated in Aart Jan Venema's distinctive, intricate style. Packed with hilarious details, Night Windows is a beautiful book that will keep children young and old entertained for hours.

Forfattere
Bibliotekernes beskrivelse A beautifully presented rhyming tale of adjusting to life in the city, with detailed illustrations adding a search and find element. Illustrated in colour throughout