New Philosophy of Literature, A - The Fundamental Theme and Unity of World Literature: the Vision of the Infinite and the Universalist Literary Tra

- The Fundamental Theme and Unity of World Literature: The Vision of the Infinite and the Universalist Literary Tradition 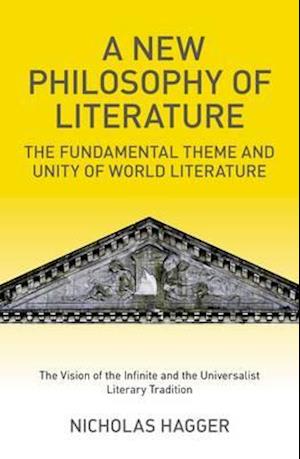 In The New Philosophy of Universalism Nicholas Hagger outlined a new philosophy that restates the order within the universe, the oneness of humankind and an infinite Reality perceived as Light; and its applications in many disciplines, including literature. In this work of literary Universalism which carries forward the thinking in T.S. Eliot's 'Tradition and the Individual Talent' and other essays, Hagger traces the fundamental theme of world literature, which has alternating metaphysical and secular aspects: a quest for Reality and immortality; and condemnation of social vices in relation to an implied virtue. Since classical times these two antithetical traditions have periodically been synthesised by Universalists. Hagger sets out the world Universalist literary tradition: the writers who from ancient times have based their work on the fundamental Universalist theme. These can be found in the Graeco-Roman world, the Middle Ages and Renaissance, in the Baroque Age, in the Neoclassical, Romantic Victorian and Modernist periods, and in the modern time.He demonstrates that the Universalist sensibility is a synthesis of the metaphysical and secular traditions, and a combination of the Romantic inspired imagination (the inner faculty by which Romantic poets approached the Light) and the Neoclassical imitative approach to literature which emphasizes social order and proportion, a combination found in the Baroque time of the Metaphysical poets, and in Victorian and Modernist literature. Universalists express their cross-disciplinary sensibility in literary epic, as did Homer, Virgil, Dante and Milton, and in a number of genres within literature - and in history and philosophy. Universalist historians claim that every civilisation is nourished by a metaphysical vision that is expressed in its art, and when it declines secular, materialist writings lose contact with its central vision. As Universalist literary works restate the order within the universe, reveal metaphysical Being and restore the vision of Reality, Hagger excitingly argues that the Universalist sensibility renews Western civilisation's health.Literary Universalism is a movement that revives the metaphysical outlook and combines it with the secular, materialistic approach to literature that has predominated in recent times. It can carry out a revolution in thought and culture and offer a new direction in contemporary literature. This work conveys Universalism's impact on literature, and should be read by all who have concerns about the sickness and decline of contemporary European/Western culture.