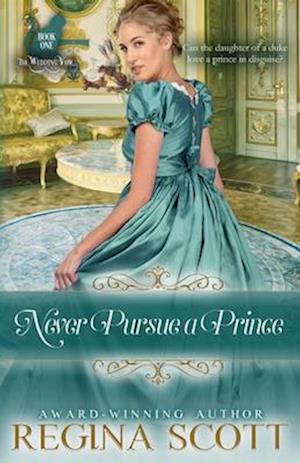 Lady Larissa, oldest daughter of the Duke of Wey, has one goal: find suitable husbands for her two younger sisters and best friend so they may live happily ever after. Despite their attempts at matchmaking for her, she's all but given up on finding her own groom, a gentleman good enough to meet her late mother's and grandmother's expectations. She has a hard enough time meeting those expectations for poise, propriety, and perfection. But a chance encounter brings the most marvelous gentleman to her attention. A shame he is merely a captain of the Imperial Guard of Batavaria and in no way the suitable husband for the daughter of a duke.

Prince Otto Leopold Augustus of Batavaria has one goal: to win back his country from those who ousted his family. But someone seems intent on stopping him, for danger stalks the corridors of their palace in England. So why not trade places with his identical twin brother, the leader of the Imperial Guard? Leo might just uncover their enemies before someone is hurt. And having an ally in the thoroughly proper and pretty duke's daughter can only help.

The more Larissa and Leo are thrown together, the more secrets come to light and the more their attraction grows. Would the daughter of a duke dare to throw off propriety, if it means winning the heart of the most princely of men?

If you like warm, witty historical romances, with a touch of intrigue, then you'll love this series starter by an award-winning author.

"Regina Scott is a first-rate storyteller who knows what her readers want in their romances." Huntress Reviews

Fortune's Brides: The Wedding Vow. Matchmaking runs rampant when four friends vow to see each other wed by harvest.