Neoliberal Globalisation and Resistance from Below

- Why the Subalterns Resist in Bolivia and not in Ghana 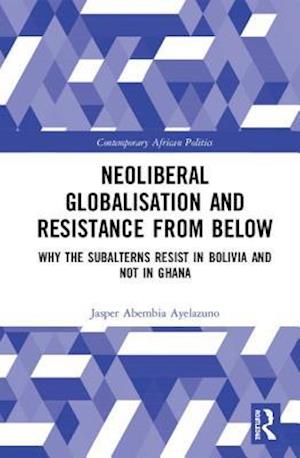 As bearers of their own emancipation, the political agency of the subaltern classes is a vexed question, a time-honoured one at that. Why do the subalterns endure injustices without revolting most of the time, but revolt sometimes against some injustices? The euphoria of 'globalisation-from-below', this book argues, skirts responsibility of addressing this question by presuming a groundswell of resistance across the world against neoliberal globalisation. In contrast to this oeuvre, Neoliberal Globalisation and Resistance from Below engages this question squarely by using the socio-historical approach to explain why the subalterns resist neoliberal globalisation in Bolivia and not in Ghana. The author urges scholars of critical political economy to pay greater attention to why the subalterns resist, rather than how they resist, or what the ideal end of their resistance should be. Such refocusing of the research and political lens will yield a more realistic picture of what is politically possible in the social context of peripheral capitalism regarding an anti-capitalist revolution. The author further argues that this refocusing will cure many of the romantic anti-capitalist claims and banal wishful thinking of a socialist revolution in peripheral capitalist regions such as Latin American, The Middle East and North Africa (MENA), and Sub-Saharan Africa.Neoliberal Globalisation and Resistance from Below will be of interest to students and scholars of African politics, neoliberalism, globalisation, political economy and subaltern politics.