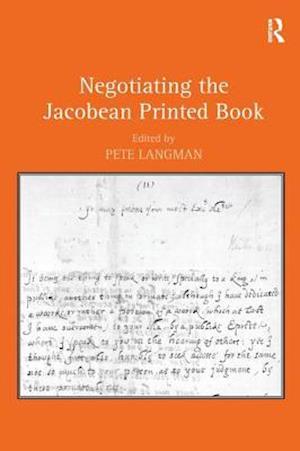 By examining the spaces where authors, printers and readers interact, Negotiating the Jacobean Printed Book highlights the manner in which contemporary culture and canon not only co-existed but mutually nourished and affected one another. An international group of book history scholars look beyond the traditional literary and canonical texts to explore, amongst other things, the physical nature of books and their place in Jacobean society. The contributors interrogate not just the texts themselves, but the habits, proclamations, letters and problems encountered by authors, printers and readers. Ranging from the funding of perhaps the most important book of the early Jacobean period, the 1611 AV Bible, and the ways in which it changed the balance of power in the King's Printers, to how the importation of Continental drill manuals by professional soldiers influenced the Privy council, the essays focus on the fissures which open up between practice and proclamation, between manuscript and press, and between print and parliament. Together these essays nuance our understanding of how print culture affected, and was affected by, wider cultural concerns; the volume constitutes a compelling contribution to both literary and historical studies of early modern England.

Forfattere
Bibliotekernes beskrivelse By examining the spaces where authors, printers and readers interact, this title highlights the manner in which contemporary culture and canon not only co-existed but mutually nourished and affected one another.