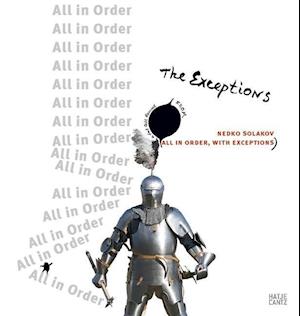 With his current book project, Nedko Solakov (*1957 in Cherven Briag, Bulgaria) once again breaks the mold and uses what is already available to draw, paint, or scrawl something new. Continuing in terms of style, format, and structure with the extensive monograph on his oeuvre that was published in 2011 and titled All in Order, with Exceptions, the new, compact volume The Exceptions (from All in Order, with Exceptions) proceeds from the same four exhibition venues that each picked out and presented a selection of thirty works, including one work per year from 1980 to 2010. The elegantly condensed and slim volume shows how this fourfold retrospective developed. It is supplemented by recent works such as Knights (and other dreams), which featured prominently at dOCUMENTA (13), and the new Paintings with No Texts series, which is as a purely visual commentary on Solakov's characteristic aesthetic of narration using text in a buoyantly light yet profound manner.

Forfattere
Bibliotekernes beskrivelse A survey of the artist's body of work in an edition for bibliophiles: a concentrated presentation of his humorous and substantial oeuvre