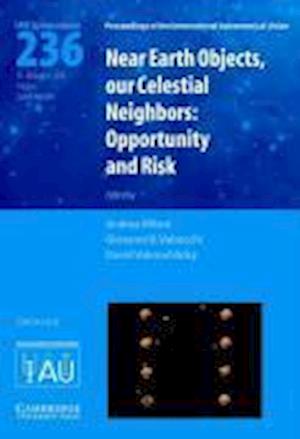 Near Earth Objects (NEOs), asteroids and comets, are the closest neighbors of the Earth-Moon system. They allow research not yet possible on more distant bodies. The IAU Symposium 236 focused on the specific observation and modeling techniques for NEOs, including radar, exploration by spacecraft, measurement of non-gravitational perturbations; also on the next generation surveys expected to increase a hundred-fold the NEO discovery rate. With data from first generation NEO surveys, we now understand how they formed and evolve, dynamically and physically, opening a window on the universal astrophysical phenomenon of collision, leaving clear markings on the surfaces of planets, including the Earth. NEOs with orbits crossing that of the Earth are also a source of impact risks and potential NEO collisions with the Earth represent a long term threat. Mankind has to put in place a chain of mitigating actions; NEO astronomers have successfully put in place the first link.

Forfattere
Bibliotekernes beskrivelse Near Earth Objects (NEOs) are an essential tool to understand the overall populations of asteroids and comets, to constrain the formation of the planetary system. This volume, IAU S236, concentrates on the specific techniques of observation and modeling which are effective for NEOs. 44 Halftones, unspecified; 255 Line drawings, unspecified