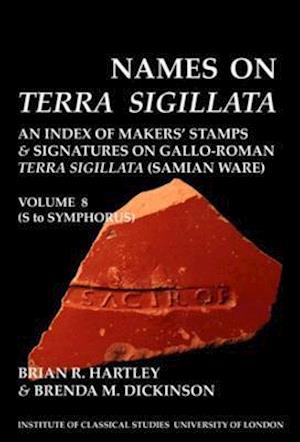 Names on Terra Sigillata, the product of 40 years of study, records over 5,000 names and some 300,000 stamps and signatures on Terra Sigillata (samian ware) manufactured in the 1st to the 3rd centuries AD in Gaul, the German provinces and Britain.To be published in 10 volumes, the work has been supported by the British Academy and the Arts and Humanities Research Council, the University of Leeds and the University of Reading, and the Roemisch-Germanisches Zentralmuseum. This is the first catalogue of its type to appear since Felix Oswald's Index of Potters' Stamps on Terra Sigillata (`Samian Ware'), published in 1931. The importance of samian as a tool for dating archaeological contexts and the vast increase in samian finds since then has prompted the authors to record the work of the potters in greater detail, illustrating, whenever possible, each individual stamp or signature which the potter used, and enumerating examples of each vessel type on which it appears, together with details of find-spots, repositories and museum accession numbers or excavators' site codes. Dating of the potters' activity is supported, as far as possible, by a discussion of the evidence. This is based on the occurrence of material in historically-dated contexts or on its association with other stamps or signatures dated by this method.The bulk of the material was examined personally by the authors, from kiln sites and occupation sites in France, the Netherlands, Germany, and Britain, but the catalogue also includes published records which they were able to verify, both from those areas and from other parts of the Roman Empire.