Mystery Writing in a Nutshell 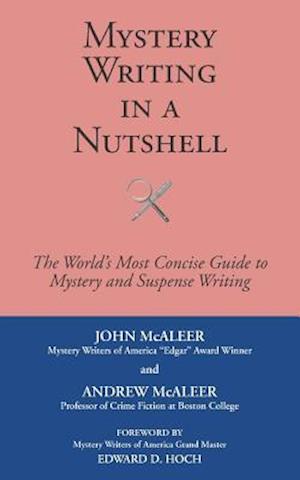 Edgar Allan Poe Award winner, Pulitzer Prize nominee, and best-selling author John McAleer, Ph.D. (Harvard), taught crime fiction at Boston College for nearly four decades, nurturing authors like George V. Higgins (The Friends of Eddie Coyle), Chuck Hogan (The Standoff), Margaret McLean (Under Oath), James Devlin (Elmore Leonard), and Ted Murphy (the "Belltown Mysteries"). Now he and his son, Andrew McAleer-also a mystery author and Professor of Crime Fiction at Boston College-share the secrets, techniques and art of crafting the mystery novel. Mystery Writing in a Nutshell is an invaluable resource which, step-by-step, takes the writer through the mystery-writing process from creating suspense and strategizing plot twists to hiding clues and enriching character development and much more. With this guide to mystery writing at your side, it is only a matter of time before your novel is afoot! ABOUT THE AUTHORS John McAleer is the Edgar Allan Poe Award-winning author of Rex Stout: A Majesty's Life and a best-selling author of fifteen other books including the critically-acclaimed mystery, Coign of Vantage. A Professor of English Literature at Harvard and, later, Boston College for more than half a century, Professor McAleer also worked as an editor of The Armchair Detective, served as a vice president of the Mystery Writers of America and was nominated for the Pulitzer Prize. Andrew McAleer is the author of three mystery novels and serves as the president of America's oldest continuing literary society, the Boston Authors Club. He teaches Crime Fiction at Boston College, is a member of the Private Eye Writers of America, the editor of the award-winning Crimestalker Casebook and a recipient of the Sherlock Holmes Revere Bowl Award. Mr. McAleer practices law privately in Massachusetts. Edward D. Hoch is a Mystery Writers of America Grand Master, an Edgar Allan Poe Award-winning author and one of the most prolific writers in the crime fiction genre. A tireless contributor to Ellery Queen Mystery Magazine, Mr. Hoch served as president of the MWA and was the 1991 guest of honor at Bouchercon.