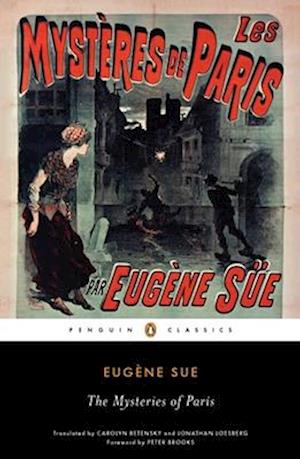 The first new translation in over a century of the the brilliant epic novel that inspired Les MiserablesFrom July 1842 through October 1843, Parisians rushed to the newspaper each week for the latest installment of Eugene Sue's The Mysteries of Paris, one of France's first serial novels. The suspenseful story of Rodolphe, a magnetic hero of noble heart and shadowy origins, played out over ninety issues, garnering wild popularity and leading many to call it the most widely read novel of the 19th century. Sue's novel created the city mystery genre and inspired a raft of successors, including Les Miserables and The Count of Monte Cristo.The intricate melodrama of The Mysteries of Paris unfolds around a Paris where the fortunes of the rich and the poor are helplessly tangled, despite the vast gulf between them. In the Cite, a seedy neighborhood where criminals gather, Rodolphe encounters a young prostitute of breathtaking purity who goes by the name Songbird. He saves her from an attack by a ruffian called the Slasher, setting off the dominoes of an epic narrative traversing the ranks of French society. As Rodolphe pursues his own mysterious quest for redemption, a circle of characters from all walks of life forms around him-some following his every move and others gravitating to his boundless generosity. From the nefarious pairing of the Schoolmaster and the Owl, a hardened criminal and an unfathomably cruel street merchant, to Morel, a gem-cutter so virtuous he refuses to steal even the smallest ruby to feed his starving family, the lines between good and evil in Sue's Paris are always clear, but never unyielding. Though the immense literary and historical resonance of Sue's magnum opus has been for years overshadowed by Hugo's achievement, this stunning new translation is a revelation, promising to bring the unmitigated pleasures of Sue's cliffhangers and criminals to a new century of readers. Sensational, steamy, tightly-plotted, pulpy, proto-socialist, heartbreaking, and riveting, The Mysteries of Paris is doubtless one of the most entertaining and influential works to emerge from the 19th century.