My Manse During the War

- A Decade of Letters to the Rev. J. Thomas Murray, Editor of the Methodist Protestant 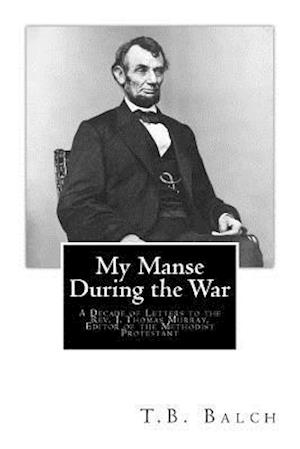 Can my readers become interested in a Manse? Perhaps they may if its inmates tried to maintain Christian feelings when the war was at its cedar gates. Religion alone or something allied to it ought to appear in a paper professedly religious. Let statesmen manage their own concerns; but Moriah, Olivet, Tabor and Calvary belong to us who are the ministers of good will to our race. Isaiah says that the feet of Prophets in his day were beautiful. Why so? Because their sandals were adorned with pearls whenever they ascended such elevations to announce glad tidings. My resolution was fixed to preach the Gospel, and only the Gospel, even should the war last so long as the one between the rival Houses of York and Lancaster, which for thirty years desolated England. What havoc did it everywhere create? Green fields faded before it, and moors became more dreary. Meadows and downs, lost their smiles when a rude soldiery crushed their flowers and dispersed their flocks. Churches too shared in the general ruin. Was not George Fox, of Leicester, a wise man in his opposition to all war? Was not Sully, prime minister of Henry Fourth, equally wise when he sought to bind all Europe in a league of peace for a hundred years by way of experiment? And what a Europe would it have been at the end of that century. Surely Russia would have been less barbarous, and Italy would have worn a sunnier look. The Rhine would have multiplied its grapes and France its lilies. Swiss Cantons would have become still more pastoral, and the fleets of England might have left their docks on errands of peaceful discovery. But let me keep to my Hermitage.