My Life in Bikes

- A 50-Year Love of Ducati, Moto Guzzi, and Other Motorcycles

indgår i serie My Life in Bikes 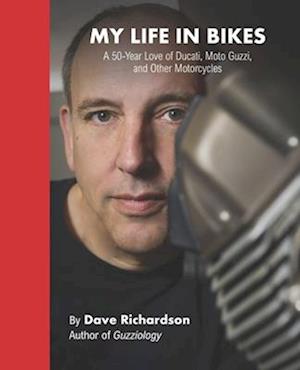 Dave Richardson bought his first motorcycle at 14. He wasn't much of a racer but wanted motorcycles to be his life. After a few odd jobs, he became a partner in newly-forming Moto International, and in no time, was thrust into running it. "It's a motorcycle shop. How hard can it be?" How hard indeed. Dave thought the hard part would be attracting customers. He never dreamed of the unexpected challenges. In these pages, the author of Guzziology tells the surprising story of dealing with banks, motorcycle manufacturers and distributors, defense contractors, finance companies, the public, and the EPA. He tells of fixing problems ignored by manufacturers, advocating for improvements in bikes, and trying to get distributors to fix customer's bikes. His career in motorcycle shops spanned 34 years, representing at various times Aprilia, Cagiva, Ducati, Husqvarna, Hyosung, KTM, Laverda, MuZ, and Ural. But always, Moto Guzzi.Recommendation: During the 1990's, I was in Mandello del Lario, Italy as part of the Moto Guzzi design team and Dave was in Seattle Washington trying to keep his Moto Guzzi shop solvent. Despite the distance, our paths crossed often. Dave was frequently invited to the Guzzi factory and became an advisor to the management. Dave is a great storyteller and this one is fascinating. It's about five decades of a life dedicated to motorcycles, starting as a kid drooling over the bikes in a motorcycle shop and ending as a savvy businessman using all his skills to keep his motorcycle shop alive. It's about a love for the sport bordering on obsession, about adversity and perseverance. If you have ever thought that the owner of your local bike shop selling those gorgeous, expensive Italian motorcycle might be stuffing money under his mattress then this tale could change your thinking. If you have ever wondered what it might be like to be a motorcycle shop owner then this book is for you too.Dr. John WittnerUS middleweight/open Endurance and Pro Twins Champion, Motorcycle engineer, and former Moto Guzzi technical consultan