- Or, Memoirs of the Lives and Writings of the Most Eminent Musical Composers and Writers, Who Have Flourished in the Different Countries of Europe during the Last Three Centuries (Volume 1) 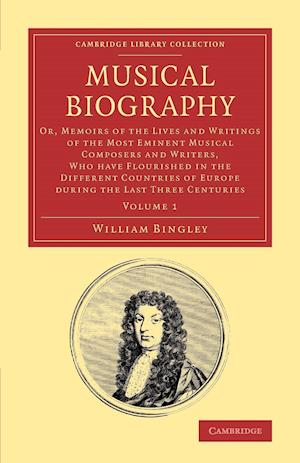 A naturalist and Church of England clergyman, William Bingley (1774-1823) wrote widely on botany, topography and zoology. Works such as his Tour of North Wales (1800), Animal Biography (1802) and Memoirs of British Quadrupeds (1809) enjoyed great popularity. He served as curate of the priory in Christchurch, Hampshire, and from 1816 to 1823 as minister of Fitzroy Chapel in Charlotte Street, London. This two-volume publication, which first appeared in 1814, is one of his many works of compilation. Bingley takes as his principal sources the great music histories of Hawkins and Burney (also reissued in this series), to which he acknowledges his debt. The work comprises vignettes of chiefly Italian, German and British composers of the sixteenth, seventeenth and eighteenth centuries, touching also on French and Spanish musicians. Volume 1 covers the sixteenth and seventeenth centuries. The introduction gives a brief account of early church music.