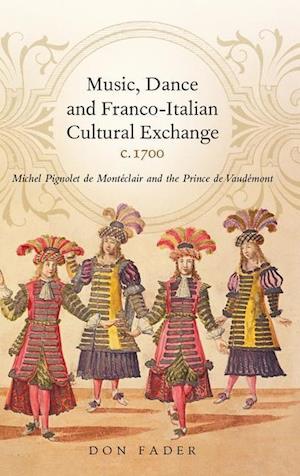 This study stems from discoveries in a trove of documents belonging to Charles-Henri de Lorraine, prince de Vaudemont, who served as governor of Milan under the Spanish crown from 1698 to 1706. These documents, together with a mass of other sources - letters, diaries, treatises, libretti, scores - offer a vivid new picture of musical life in Paris and Milan as well as exchanges between France and Italy. The book is both a patronage study and an examination of the contributions by - and the difficulties facing - musicians and dancers who worked across national and cultural boundaries.Music, Dance, and Franco-Italian Cultural Exchange, c.1700 follows the careers of the prince and the French violinist and composer Michel Pignolet de Monteclair. In the context of a renewed fascination with Italian music in the 1690s, Monteclair made a name for himself in Paris as a pedagogue and composer who understood both national styles and blended them in a way that was successful on French terms. Vaudemont hired Monteclair to direct a French violin band and to compose dance music for a series of new operas that observers declared "the best in Italy" but are virtually unknown today. These productions involved collaborations among a mixed company of French and Italian musicians, dancers, composers, and librettists modeled on the practice of Turinese court operas. The book is an account of the contributions of these figures to the cultural life of Paris, Milan, and other northern Italian states, and to the creative mixing of musical styles, operatic conventions, and dance technique in France and Italy through the 1720s and beyond. The connections fostered by Vaudemont thus played a heretofore unrecognized early role in the development of 18th-century cosmopolitanism, and they attest to both the liveliness and the artistic importance of such exchanges in the era before the well-known travels of Handel, Telemann, and Vivaldi.