Duchamp: Museum in a box 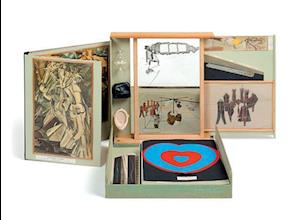 With his Boite-en-valise, or Museum in a Box, Duchamp embarked on one of his more ambitious projects: a portable museum of miniature replicas and facsimiles created with the help of elaborate reproduction techniques as pochoir (a type of hand stencilling) and comprising his most important works. Conceived in the mid-1930s and consisting of eighty-one items, it was first released in 1941 and continued to be assembled in various editions until after his death, with the final seven different series totalling about 300 items. This publication is a facsimile of the series D, 1961 edition. Created with the full approval of the Duchamp Estate, it contains a reproduction of The Large Glass on Plexiglas, colour reproductions of his pictures, reproductions of his drawings and a selection of his humorous texts, a glass vial of Parisian air, a urinal, a small sugar dispenser, 'canned chance' and other miscellanea, all housed in a green cardboard box.

Forfattere
Bibliotekernes beskrivelse A facsimile of the Series D, 1961 edition of Duchamp's Museum in a Box.