Murder on the Lusitania 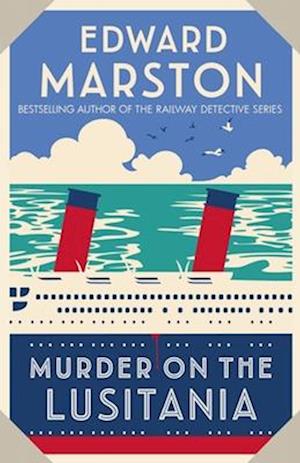 September 1907. George Dillman sets sail from Liverpool to New York on the Lusitania's maiden voyage. Posing as a passenger, Dillman is in fact an undercover detective hired by the Cunard Line to keep an eye out for petty crimes. But after some uneventful days aboard, the ship's blueprints are stolen and then a body is found.As Dillman works to get to the bottom of the crimes, he makes an unusual friend, first-class passenger Genevieve Masefield, and the two uncover secrets aboard the ship that prove explosive.The Lusitania was a British ocean liner that was sunk in 1915 by a German U-boat off the coast of Ireland, killing 1,198 passengers and crew. Lusitania held the Blue Riband prize for the fastest Atlantic crossing and was briefly the world's largest passenger ship until the completion of the Mauretania.Previously published under the name Conrad Allen, the Ocean Liner series is relaunched for a new generation of readers.

Forfattere
Bibliotekernes beskrivelse Staring on the maiden voyage of the Lusitania, American private detective George Dillman and intelligent young Englishwoman Genevieve Masefield, make a winning duo for these compelling whodunnits aboard the iconic luxury liners of the time.