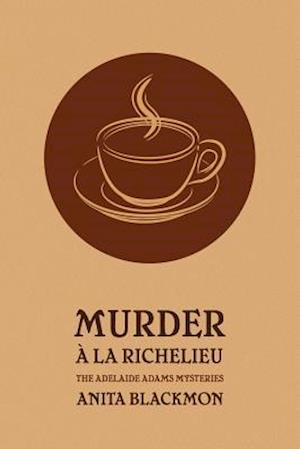 In the opening pages of "the old battle-ax" Adelaide Adams' debut appearance, Murder á la Richelieu, Anita Blackmon signals her readers that she is humorously aware of the grand old, much-mocked but much-read "Had I But Known" tradition that she is mining when she has Adelaide declare: "Had I suspected the orgy of bloodshed upon which we were about to embark, I should then and there, in spite of my bulk and an arthritic knee, have taken shrieking to my heels." Unfortunately, Adelaide confides: "There was nothing on this particular morning to indicate the reign of terror into which we were about to be precipitated. Coming events are supposed to cast their shadows before, yet I had no presentiment about the green spectacle case which was to play such a fateful part in the murders, and not until it was forever too late did I recognize the tragic significance back of Polly Lawson's pink jabot and the Anthony woman's false eyelashes." Well! What reader can stop there? Adelaide goes on with much gusto and foreboding to relate the murderous events at the Hotel Richelieu, an establishment in an unnamed southern city (clearly Little Rock, Arkansas). Adelaide is a wonderful character: tough on the outside but rather a sentimentalist within, given to the heavy use of clichés yet actually quite acute. The life in and inhabitants of the old hotel are well-conveyed, the pace and events lively and the mystery complicated yet clear (and at the same time fair with the readers). Perhaps most enjoyable of all is the author's strong sense of humor, ably conveyed through Adelaide's memorable narration. Blackmon clearly appreciated that HIBK tales can be a tad implausible in their incredible convolutions (as can the classical Golden Age mystery in general) and she has a lot of fun with genre conventions. Her readers should have a lot of fun too.