- Proceedings of the Conference held at the Mathematical Research Institute at Oberwolfach, Black Forest, February 8-12, 1982 (Book 2) 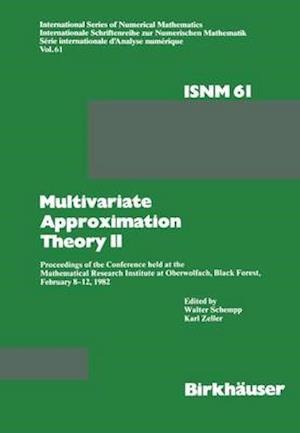 The Third International Symposium on Hultivariate Approximation Theory was held at the Oberwolfach !1athematical Research Insti- tute, Black Forest, February 8-12, 1982. The preceding conferen- ces on this topic were held in 1976* and 1979**. The conference brought together 50 mathematicians from 14 coun- tries. These Proceedings form arecord of most of the papers pre- sented at the Symposium. The topics treated cover different problems on multivariate approximation theory such as new results concerning approxima- tion by polynomials in Sobolev spaces, biorthogonal systems and orthogonal series of functions in several variables, multivariate spline functions, group theoretic and functional analytic methods, positive linear operators, error estimates for approximation procedures and cubature formulae, Boolean methods in multivari- ate interpolation and the numerical application of summation procedures. Special emphasis was posed on the application of multivariate approximation in various fields of science. One mathematician was sorely missed at the Symposium. Professor Arthur Sard who had actively taken part in the earlier conferen- ces passed away in August of 1980.Since he was a friend of many of the participants, the editors wish to dedicate these Procee- dings to the memory of this distinguished mathematician. Abrief appreciation of his life and mathematical work appears as well *"Constructive Theory of Functions of Several Variables". Edited by w. Schempp and Karl Zeller. Lecture Notes in 1-1athematics, Vol.