- How Birds Got Their Names 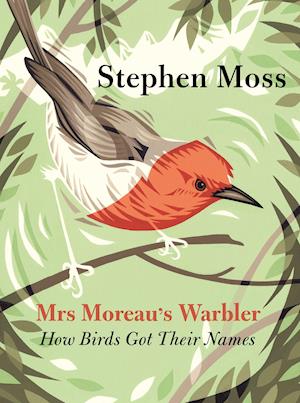 We use names so often that few of us ever pause to wonder about their origins. What do they mean? And where did they come from? From the common starling to the many-coloured rush tyrant, the names we have given to birds are some of the most vivid and evocative words in the English language. They can carry whole stories - of arctic expeditions, pitched battles between rival ornithologists or touching romantic gestures. Through fascinating encounters with the bird kingdom and the rich cast of characters responsible for coming up with their names, in Mrs Moreau's Warbler Stephen Moss shows how these words reveal as much about ourselves and our relationship with the natural world as about the creatures they describe.

Forfattere
Bibliotekernes beskrivelse Cuckoo, chiffchaff and kittiwake: just three of many names based on the bird's sound. Wheatear: nothing to do with ears of wheat, but the Anglo-Saxon for "White-arse". Hobby: whoe scientific name, Falco subbuteo, inspired the table-top football game. Dartford warbler: originally found near Dartford, yet never sighted there again. Cuddy's duck: local name for the eider, whose feathers were made into eiderdowns. Bananaquit, festive coquette and screaming piha: the world's most unusual bird names? Mrs Moreau's warbler: the touching love story behind the name of one of the world's rarest birds.