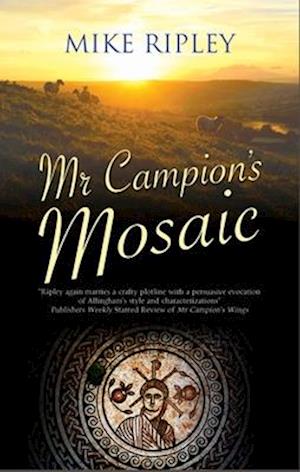 Albert Campion travels to Dorset as he attempts to get to the bottom of a series of shocking events connected to a TV adaptation of one of Evadne Childe's famous novels.London, 1972. The Evadne Childe Society has gathered in honour of what would have been the author's eighty-second birthday, and Albert Campion is there as a reluctant guest speaker and ceremonial birthday cake cutter.But Campion's oratory skills aren't the only thing in demand. A TV remake of a twenty-year-old film adaptation of one of Evadne's classic novels, The Moving Mosaic, has been derailed by someone attempting to murder the leading man - the latest in a series of increasingly disturbing incidents - and the society wants Campion to investigate. Who is determined to sabotage the production at any cost, and why? Travelling to the picturesque village of Kingswalter Manor in Dorset where filming is due to start, Campion soon stumbles upon dark secrets, ghosthunters, an impressive mosaic, and murder.