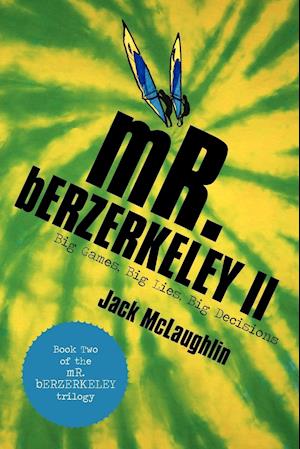 Jim Sain's star is rising! Life in Berkeley is as colorful as ever, and now, his life is even more bizarre than before- just like he likes it. Despite his madness, buff oonery, and lefty leanings, Berkeley's zany mayor continues to be a media darling. Back for more, Jack McLaughlin's love song for Berkeley continues in mR. bERZERKELEY II. Jim's trying his best to navigate the waters, but Big Game antics and even bigger lies spun by his enemies are making it a rough crossing. And now that he's a father, he's out to lead the willing and find solutions for all the many challenges he now faces-including a few surprises. His life is filled with real characters, as the expression goes: Nymphomaniac Jasmine is leading Josh toward the altar, while the pregnant Babe has escaped to Kansas, leaving Winnie to handle Hamilton House alone. Freshman Sarah changes lifestyles-again-and lesbian lovers Stephanie and Judy want to experience motherhood. Mysterious Michael and his mother, the evil vice chancellor, continue their hatred toward each other. Asia's bordello past and a murder put her future (and the chancellor's reputation) in danger. Former boarder Ainsley Bassette reappears on the scene; Bessie faces a life-or-death operation; and now, Trojan's fighting a deadly battle with coyotes. Toss in a little naked windsurfing on Southern California beaches and a trip to Disneyland, and you've got another exciting installment of wacky mR. bERZERKELEY adventures.