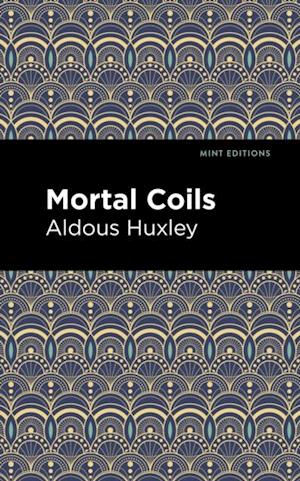 Mortal Coils (1921) is a collection of short fiction by English author Aldous Huxley. Focused on themes of love, taboo, disillusionment, and the writing process, these four stories and one play illuminate the young writer's abundant wit and critical vision of life in twentieth century England. In 'The Gioconda Smile,' a wealthy aristocrat named Henry Hutton invites the young Miss Janet Spence to dinner with him and his invalid wife Doris. After eating a dish against her doctor's orders, Doris falls ill and is escorted to her room by her husband, after which Miss Spence goes home for the night. Taking the opportunity to see his mistress, Hutton leaves his wife alone, unwittingly, but perhaps unsurprisingly, welcoming disaster into his routinely dishonorable life. 'The Tillotson Banquet' involves the unexpected rediscovery of a renowned artist who seemed to have disappeared without a trace in 1860 after painting his masterpiece at the age of twenty-six. Tasked with arranging an illustrious banquet for the man, Spode, the young man who at long last found Tillotson, scrambles to appease Lord Badgery, his illustrious benefactor. Mortal Coils compiles five short works of fiction by Aldous Huxley, a master-satirist and immensely gifted visionary whose work continues to astonish, humor, and terrify readers and critics alike.With a beautifully designed cover and professionally typeset manuscript, this edition of Aldous Huxley's Mortal Coils is a classic of English literature reimagined for modern readers.