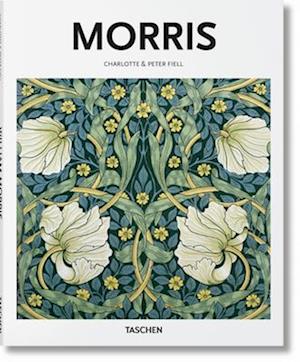 Forfattere
Forlagets beskrivelse William Morris (1834-1896) was one of the greatest creative figures of the 19th century. As a visionary designer, as well as a manufacturer, writer, artist, and socialist activist, he pioneered the Arts and Crafts movement of the Victorian era, and left an extraordinary influence on architecture, textile, and interior design.This richly illustrated book offers a suitably beautiful introduction to Morris's colorful life and all aspects of his design work, including interiors, tiles, embroidery, tapestries, carpets, and calligraphy. Though best known in his lifetime as a poet and author, it is these exquisite designs that secured Morris's posthumous reputation. As page after page dazzles with their beautiful patterns and forms, we explore the pioneering craftsmanship and natural motifs that inspired them, as well as Morris's remarkable cultural legacy, through British textiles, Bauhaus, and even modern environmentalism.About the seriesBorn back in 1985, the Basic Art Series has evolved into the best-selling art book collection ever published. Each book in TASCHEN's Basic Architecture series features:an introduction to the life and work of the architectthe major works in chronological orderinformation about the clients, architectural preconditions as well as construction problems and resolutionsa list of all the selected works and a map indicating the locations of the best and most famous buildingsapproximately 120 illustrations (photographs, sketches, drafts, and plans)
Bibliotekernes beskrivelse William Morris was a polymath designer, writer, artist, and socialist activist, associated with England's Pre-Raphaelite Brotherhood as well as Arts and Crafts movement. His prolific design work included tiles, embroidery, tapestries, wallpaper, and carpets and championed handcraftsmanship, natural dyes, "art for all", and beautiful patterns of...