More Fun in the New World

- The Unmaking and Legacy of L.A. Punk 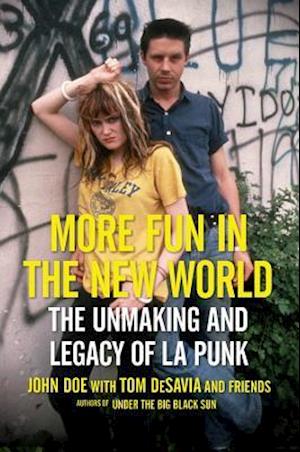 Picking up where Under the Big Black Sun left off, More Fun in the New World explores the years 1982 to 1986, covering the dizzying pinnacle of L.A.'s punk rock movement as its stars took to the national and often the international stage. Detailing the eventual splintering of punk into various sub-genres, the second volume of Doe and DeSavia's punk history will portray how the Reagan years affected the movement, how the scene ultimately influenced popular culture from fashion to television and film, and how mainstream stars adapted punk sounds and style.As with Under the Big Black Sun, the book will feature stories of triumph, failure, stardom, addiction, recovery, and loss as told by the people who were influential in the scene with a cohesive narrative from authors John Doe and Tom DeSavia. Along with many returning voices, More Fun in the New World will weave in the perspectives of Belinda Carlisle, Susanna Hoffs, Joan Jett, and Shepard Fairey among others.In addition to stories of success, the book also offers a cautionary tale of an art movement that directly inspired commercial acts such as Green Day, Rancid, and Offspring. Readers will find themselves rooting for the purists of punk juxtaposed with the MTV-dominating rock superstars of the time who flaunted a "born to do this, it couldn't be easier" attitude that continued to fuel the flames of new music. More Fun in the New World follows this progression of L.A. punk and, some say, its conclusion.