Monte Cassino: Amoured Forces in the Battle for the Gustav Line 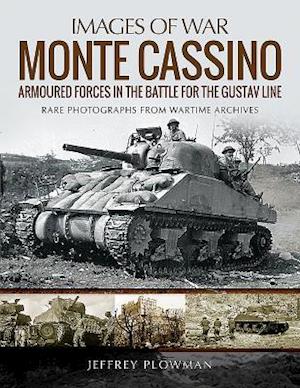 The battles fought between the Allied armies and the German Wehrmacht at Monte Cassino in 1944 were key episodes in the protracted Italian campaign, and the eventual Allied victory was a decisive step in the wider war to liberate Europe from German occupation. Much has been written about Cassino, but few books have chosen to tell the story through photographs - to give a visual insight into the fighting and the forces involved, the conditions in which they fought, and the landscape around the Monte Cassino abbey which became a battlefield. That is why Jeffrey Plowman's photographic history is of such value.Using almost 200 wartime images, many of which have not been published before, he gives a graphic impression of the realities of the fighting as it was experienced by the troops on the ground. He focuses on the tanks - the array of armoured vehicles deployed by both sides which played a critical role. This aspect of Cassino has rarely been covered in such detail and in such a vivid way.The book will be of special interest to modellers and historians of armoured warfare, but it will also appeal to readers who have a more general interest in the Italian campaign.

Forfattere
Bibliotekernes beskrivelse A vivid photographic history of the battle of Monte Cassino in the Second World War. 200 illustrations