Monson, C: Music in Print and Beyond - Hildegard von Bingen

- Monson, C: Music in Print and Beyond - Hildegard von Bingen 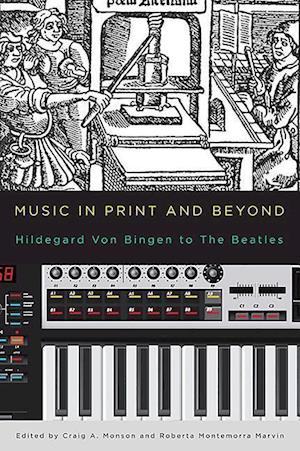 This collection of essays examines the diverse ways in which music and ideas about music have been disseminated in print and other media from the sixteenth century onward. Contributors look afresh at unfamiliar facets of the sixteenth-century book trade and the circulation of manuscript and printed music in the seventeenth to nineteenth centuries. They also analyze and critique new media forms, showing how a dizzying array of changing technologies has influenced what we hear, whom we hear, and how we hear. The repertoires considered include Western art music -- from medieval to contemporary -- as well as popular music and jazz. Assembling contributions from experts in a wide range of fields, such as musicology, music theory, music history, and jazz and popular music studies, Music in Print and Beyond: Hildegard von Bingen to The Beatles sets new standards for the discussion of music's place in Western cultural life. Contributors: Joseph Auner, Bonnie J. Blackburn, Gabriela Cruz, Bonnie Gordon, Ellen T. Harris, Lewis Lockwood, Paul S. Machlin, Roberta Montemorra Marvin, Honey Meconi, Craig A. Monson, Kate van Orden, Sousan L. Youens. Roberta Montemorra Marvin teaches at the University of Iowa and is the author of Verdi the Student -- Verdi the Teacher (Istituto Nazionale di Studi Verdiani, 2010) and editor of The Cambridge Verdi Encyclopedia (Cambridge University Press, 2013). Craig A. Monson is Professor of Musicology at Washington University (St Louis, Missouri) and is the author of Divas in the Convent: Nuns, Music, and Defiance in Seventeenth-Century Italy (University of Chicago Press, 2012).

Forfattere
Bibliotekernes beskrivelse Fresh and innovative takes on the dissemination of music in manuscript, print, and, now, electronic formats, revealing how the world has experienced music from the sixteenth century to the present.