Monarchy, Magnates and Institutions in the Anglo-Norman World 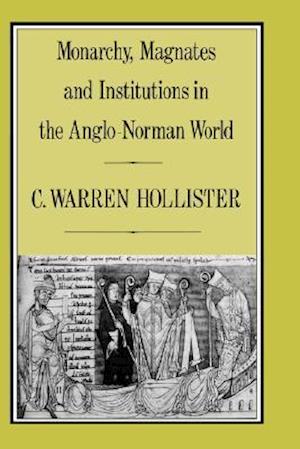 The study of Anglo-Norman history has been greatly enhanced in recent years by seeing the political context of the day not as a static feudal network, but as a changing pattern of personal and political allegiance, in which the careful control of reward and punishment by the monarch to ensure loyalty was of prime importance in ensuring the stability of the crown. Few historians have done more to show the working of this system than Warren Hollister. Monarchy, Magnates and Instututions in the Anglo-Norman World brings together a collection of his work pubished since 1968 and makes available a coherent and clear view of the major features of the period. Professor Hollister shows how the threat of civil war after the death of William the Conqueror dominated political loyalties until the battle of Tinchebray (1106), and the skill of Henry I in ensuring the support of the magnates both before and after the defeat of Roberrt of Normandy; the careers of three magnates, Robert Malet, William of Warrene and William de Mandeville are traced to demonstrate the dependence of the fortunes of such men and their families on the maintenance of good relations with the king.The author goes on to examine the beginnings of institutional government: the early history of the English treasury; the separation of the magnates from the curiales, those with administrative functions at court; and the importance of the career of Roger of Salisbury.Monarchy, Magnates and Institutions also includes a view of the argument over the effects of the Conquest on feudalism, and an assessment of the nature of the Angevin empire and the viability of the Anglo-Norman state. Finally Professor Hollister provides the clearest and most definite answer possible in terms of the available evidence to the speculations - including murder and magic - about the death of William Rufus in 1100.