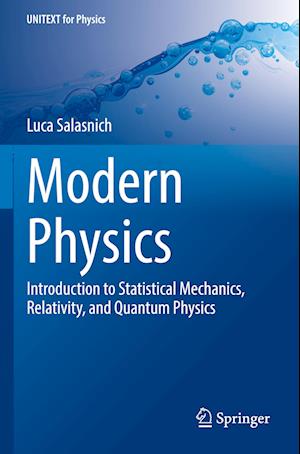 This book offers an introduction to statistical mechanics, special relativity, and quantum physics. It is based on the lecture notes prepared for the one-semester course of "Quantum Physics" belonging to the Bachelor of Science in Material Sciences at the University of Padova.The first chapter briefly reviews the ideas of classical statistical mechanics introduced by James Clerk Maxwell, Ludwig Boltzmann, Willard Gibbs, and others. The second chapter is devoted to the special relativity of Albert Einstein. In the third chapter, it is historically analyzed the quantization of light due to Max Planck and Albert Einstein, while the fourth chapter discusses the Niels Bohr quantization of the energy levels and the electromagnetic transitions. The fifth chapter investigates the Schrodinger equation, which was obtained by Erwin Schrodinger from the idea of Louis De Broglie to associate to each particle a quantum wavelength. Chapter Six describes the basic axioms of quantum mechanics, which were formulated in the seminal books of Paul Dirac and John von Neumann. In chapter seven, there are several important application of quantum mechanics: the quantum particle in a box, the quantum particle in the harmonic potential, the quantum tunneling, the stationary perturbation theory, and the time-dependent perturbation theory. Chapter Eight is devoted to the study of quantum atomic physics with special emphasis on the spin of the electron, which needs the Dirac equation for a rigorous theoretical justification. In the ninth chapter, it is explained the quantum mechanics of many identical particles at zero temperature, while in Chapter Ten the discussion is extended to many quantum particles at finite temperature by introducing and using the quantum statistical mechanics. The four appendices on Dirac delta function, complex numbers, Fourier transform, and differential equations are a useful mathematical aid for the reader.