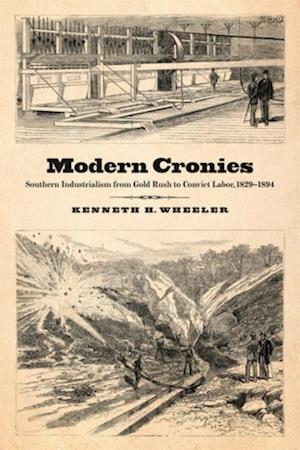 Modern Cronies traces how various industrialists, thrown together by the effects of the southern gold rush, shaped the development of the southeastern United States. Existing historical scholarship treats the gold rush as a self-contained blip thataside from the horrors of Cherokee Removal (admittedly no small thing) and a supply of miners to California in 1849had no other widespread effects. In fact, the southern gold rush was a significant force in regional and national history. The pressure brought by the gold rush for Cherokee Removal opened the path of the Western Atlantic Railroad, the catalyst for the development of both Atlanta and Chattanooga, Tennessee. Iron makers, attracted by the gold rush, built the most elaborate iron-making operations in the Deep South near this railroad, in Georgias Etowah Valley; some of these iron makers became the industrial talent in the fledgling postbellum city of Birmingham, Alabama. This book explicates the networks of associations and interconnections across these varied industries in a way that newly interprets the development of the southeastern United States. Modern Cronies also reconsiders the meaning of Joseph E. Brown, Georgias influential Civil War governor, political heavyweight, and wealthy industrialist. Brown was nurtured in the Etowah Valley by people who celebrated mining, industrialization, banking, land speculation, and railroading as a path to a prosperous future. Kenneth H. Wheeler explains Browns familial, religious, and social ties to these people; clarifies the origins of Browns interest in convict labor; and illustrates how he used knowledge and connections acquired in the gold rush to enrich himself. After the Civil War Brown, aided by his sons, dominated and modeled a vigorous crony capitalism with far-reaching implications.