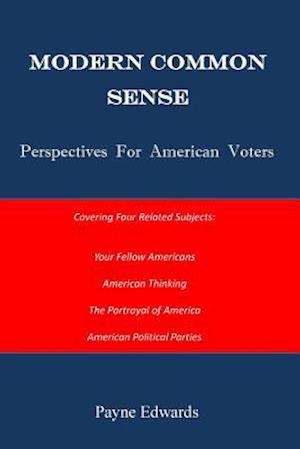 In 1776 an unknown observer wrote a pamphlet that changed America. Thomas Paine put into simple words what many believed but couldn't articulate. He ignited thinking that replaced confusion with clarity and a sense of purpose. Americans today are pummeled by the media and politicians with incoherent information. They say that the country is deeply divided, that crises abound and things are getting worse. Meanwhile, we are cautioned to ignore our instincts and trust the experts. Modern Common Sense presents fresh perspectives on America. It explains why today's turmoil is more an illusion than a reality and how Americans can see through the media fog and think for themselves. It examines four related topics. After considering how many Americans there are and the fields in which they work, it examines American values and American diversity. It then examines how Americans think. The relatively new field of behavioral economics has shown that the decisions which people make may be the result of honest, open thinking, biased or faulty thinking, or, in some cases, with no real thinking at all. Most people rely on common sense. But a sizeable number of Americans have been educated to think differently while completing a college degree, and their thinking affects the beliefs they adopt and influences the decisions they make. America is portrayed in elementary and secondary schools, on college campuses, and in the dominant media, including print, broadcast and entertainment. These institutions share common characteristics that play a significant role in crafting the portrayal. Their outsized influence is explained and its impact is described. Two final chapters look at elections from different vantage points: the parties and the voters. It discusses how the political parties define themselves and seek to divide Americans to garner their votes. The analysis of modern America is meant to illuminate and educate, not to suggest new policies. It points to an indirect solution: a more informed, aware and independent-thinking electorate.