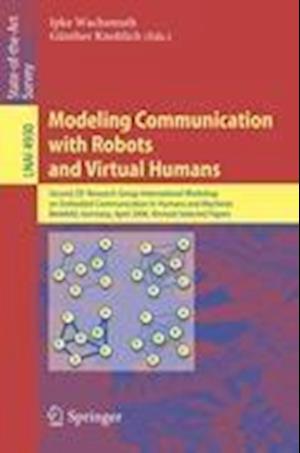 Embodied agents play an increasingly important role in cognitive interaction technology. The two main types of embodied agents are virtual humans inhabiting simulated environments and humanoid robots inhabiting the real world. So far research on embodied communicative agents has mainly explored their potential for practical applications. However, the design of communicative artificial agents can also be of great heuristic value for the scientific study of communication. It allows researchers to isolate, implement, and test essential properties of inter-agent communications in operational models. Modeling communication with robots and virtual humans thus involves the vision of using communicative machines as research tools. Artificial systems that reproduce certain aspects of natural, multimodal communication help to elucidate the internal mechanisms that give rise to different aspects of communication. In short, constructing embodied agents who are able to communicate may help us to understand the principles of human communication. As a comprehensive theme, "Embodied Communication in Humans and Machines" was taken up by an international research group hosted by Bielefeld University's Center for Interdisciplinary Research (ZiF - Zentrum fur interdisziplinare Forschung) from October 2005 through September 2006. The overarching goal of this research year was to develop an integrated perspective of embodiment in communication, establishing bridges between lower-level, sensorimotor functions and a range of higher-level, communicative functions involving language and bodily action. The present volume grew out of a workshop that took place during April 5-8, 2006 at the ZiF as a part of the research year on embodied communication.