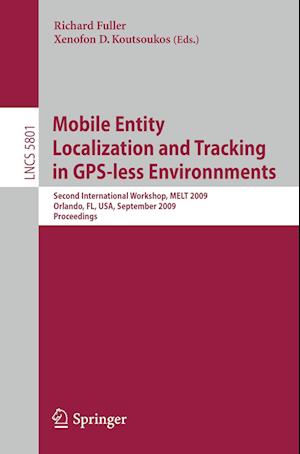 This volume contains the proceedings of the Second International Workshop on Mobile Entity Localization and Tracking in GPS-less Environments (MELT 2009), held in Orlando, Florida on September 30, 2009 in conjunction with the 11th International Conference on Ubiquitous Computing (Ubicomp 2009). MELT provides a forum for the presentation of state-of-the-art technologies in mobile localization and tracking and novel applications of location-based s- vices. MELT 2009 continued the success of the ?rst workshop in the series (MELT 2008), which was held is San Francisco, California on September 19, 2008 in conjunction with Mobicom. Location-awareness is a key component for achieving context-awareness. - cent years have witnessed an increasing trend towards location-based services and applications. In most cases, however, location information is limited by the accessibility to GPS, which is unavailable for indoor or underground fac- ities and unreliable in urban environments. Much research has been done, in both the sensor network community and the ubiquitous computing community, to provide techniques for localization and tracking in GPS-less environments. Novel applications based on ad-hoc localization and real-time tracking of - bile entities are growing as a result of these technologies. MELT brings together leaders from both the academic and industrial research communities to discuss challenging and open problems, to evaluate pros and cons of various approaches, to bridge the gap between theory and applications, and to envision new research opportunities.