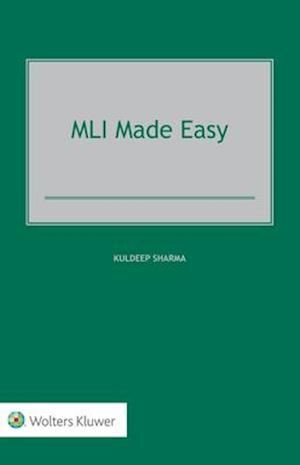 The Multilateral Convention to Implement Tax Treaty Related Measures to Prevent Base Erosion and Profit Shifting (MLI) provides an innovative approach to enable countries to swiftly modify their bilateral tax treaties in order to implement measures developed in the course of the Base Erosion and Profit Shifting (BEPS) Project. MLI, the first successfully concluded multilateral tax treaty, provides jurisdictions with the tools they need to ensure that profits are taxed where economic activities generating the profits are performed, while at the same time giving businesses greater certainty. MLI Made Easy makes it easier to get a complete grasp of this swift but complex modification process of tax treaties. This first and only self-contained book offers an unmatched article-by-article discussion of the MLI with an abundance of practical examples, diagrams, and flowcharts to make the information easier to understand and apply. Focusing on measures to combat tax evasion and abuse of tax treaties arising due to artificial avoidance of a permanent establishment status, hybrid mismatch arrangements, and other aspects of taxation, the book includes an in-depth discussion of the following and more: how specific gaps in existing bilateral tax treaties are addressed by the MLI; positions taken by selected jurisdictions and their impact on treaties; compatibility clauses, notification clauses, opting-in mechanisms, alternative provisions, and reservations; experiences in the course of implementation of the MLI; misconceptions and lingering doubts in respect of various substantive and procedural provisions of the MLI; interaction between the principal purpose test and simplified limitation on benefits; improving dispute resolution; and meaning of the phrases ';on or after', ';other taxes', and interpretational issues in entry into effect provisions. Adopted by a majority of jurisdictions worldwide, MLI preserves the tax sovereignty of its Parties and has been successful in overcoming barriers to the conclusion of a worldwide multilateral tax treaty. Because this easy-to-use book immensely facilitates understanding and application of the treaty measures developed in the course of the BEPS Project, it will be of immeasurable use to practitioners and other professionals engaging in international taxation, as well as to taxation authorities and interested academics in any part of the world.