- Evgenii Zamiatin and the Literary Stylization of Rus 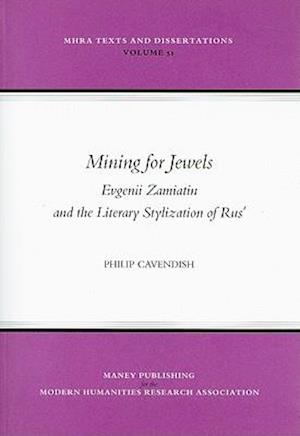 Evgenii Zamiatin's reputation rests on the pivotal role he played in the development of Russian modernism. Hitherto, however, critical engagement with the experimental nature of his fiction has been largely confined to his middle period: the satirical stories set in Great Britain, the dystopian novel My, and related works. As a writer who came to prominence at the time of the October Revolution, Zamiatin is best known as an early and vocal critic of the new culture of conformism, and as the author in the 1920s of various artistic manifestoes in which he engaged with the problem of literature's future in relation to the Revolution, and sought to articulate his own brand of synthetic modernism. This study presents a different and complementary view of Zamiatin as a writer whose fiction, whilst certainly modernist, conformed to what Eikhenbaum termed 'literary Populism'. Zamiatin's intimate knowledge of the Russian provinces and the world of folk-religious culture are key elements in the skaz-style conceit which underpins his early fiction.This study stresses Zamiatin's enormous debt to such writers as Leskov and Remizov, and locates his work within a rich tradition of ethnographic belles-lettres and oral-based fiction. The texts analysed exploit materials from the folk-religious imagination in an attempt to refresh and 'democratize' the literary language through the use of the peasant vernacular. Zamiatin sought immediacy and dynamism in his provincial prose, and his works in this mould are best appreciated through the prism of twentieth-century neoprimitivism and expressionism. Their lubok-style simplicity, however, conceals a complex attitude towards the folk-religious world at their core. The poetic and celebratory is balanced by the sceptical and ironic, and the resulting tension characterizes these texts as essentially modernistic.