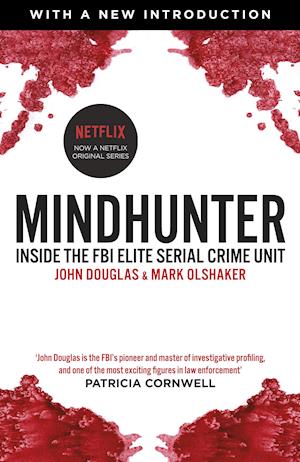 "Mindhunter" by John Douglas is the bestselling book behind the famous Netflix show of the same name. “Mindhunter” is based on true events.

As an expert in behavioral science and criminal profiling and also a former FBI Special Agent, John Douglas is facing - and trying to understand - some of the worst serial killer cases in history such as Jeffrey Dahmer, Charles Manson, John Wayne Gacy, Ted Bundy and The Atlanta Child Murder. Trying to get inside their minds.

John Douglas is working his way through the dark world of serial murders. Trying to understand how they think and the reasons behind their deeds to prevent more innocent lives from being victims of their evil.

John Douglas’ work is not just good - it’s great. And over time his operation becomes one of the FBI’s elite task forces. Now, after his retirement John Douglas can finally tell his story.

“Mindhunter” is a true story about the darkness in our world.

Forfatter
Forlagets beskrivelse ________________________________________The bestselling true story and inspiration behind the hit Netflix show of how one underfunded FBI team became the first to explore the dark world of serial murderers.John Douglas is a former FBI Special Agent and expert in criminal profiling and behavioural science. He made a career of looking evil in the eye - and understanding it. No wonder that he was the inspiration for Special Agent Jack Crawford in The Silence of the Lambs, as well as the film's consultant on the reality of serial killers.Douglas invented and established the practice of criminal profiling, and submerged himself in the world of serial killers in a quest to understand why they killed, and to help prevent more innocent lives from being ended by future killers. As his serial crime unit developed from a derided two-bit operation in a dingy officer to one of the FBI's elite task forces, Douglas personally confronted the most terrible crimes of the age, including those of Jeffrey Dahmer, Charles Manson, Ted Bundy and the Atlanta child murderer.With the fierce page-turning power of a bestselling novel, yet terrifyingly true, Mindhunter is a true crime classic.________________________________________'John Douglas knows more about serial killers than anybody in the world' - Jonathan Demme, director of The Silence of the Lambs 'A cracker of a book' - Esquire