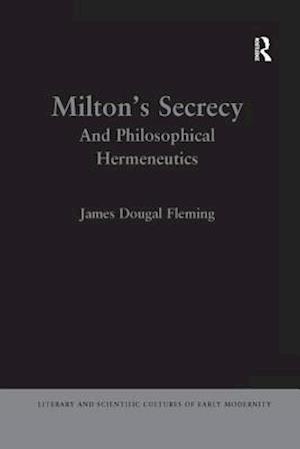 Scientific modernity treats interpretation as a matter of discovery. Discovery, however, may not be all that matters about interpretation. In Milton's Secrecy, J. D. Fleming argues that the poetry and prose of John Milton (1608-1674) are about the presentation of a radically different hermeneutic model. This is based on openness within language, rather than on secrets within the world. Milton's representations of meaning are exoteric, not esoteric; recognitive, not inventive. Milton's Secrecy places its titular subject in opposition to the epistemology of modern natural science, and to the interpretative assumptions that science supports. At the same time, the book places Milton within early modern contexts of interpretation and knowledge. Drawing on Renaissance Neoplatonism, Tudor-Stuart ideology, and the Calvinist theory of conscience, Milton's Secrecy argues that the attempt to theorize interpretation without discovery is not unorthodox within early modern English culture. If anything, Milton's hostility to secrecy and discovery aligns him with his culture's ethical and hermeneutic ideal. Milton's Secrecy provides an historical framework for considering the theoretical validity of this ideal, by aligning it with the philosophical hermeneutics of Hans-Georg Gadamer.