- Caudrey, P: Military Society and the Court of Chivalry in th 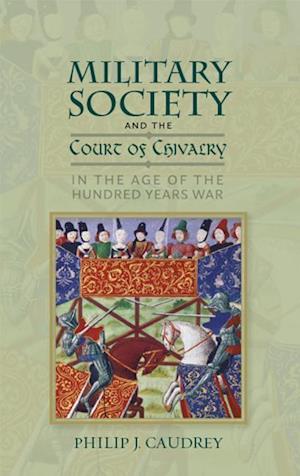 "The highest and most sovereign things a knight ought to guard in defence of his estate are his troth and his arms." So declared Richard, Lord Scrope of Bolton, before the Court of Chivalry, eloquently encapsulating the fundamental role heraldic identity played in the lives of the late medieval English gentry. The Court of Chivalry was England's senior military court during the age of the Hundred Years War (1337-1453), but unfortunately its medieval registers are now lost and only a bare few cases survive. This book explores three of the best preserved of those cases: Scrope v. Grosvenor (1385-91), Lovel v. Morley (1386-7) and Grey v. Hastings (1407-10), disputes in which competing knightly families claimed rightful possession of the same coat-of-arms. Hundreds of witnesses gave evidence in each of these cases, in the process providing vivid insights into the military, social, and cultural history of late medieval England. This study asks a number of important questions. How did the plaintiffs and defendants choose their witnesses? What motives and constraints shaped their choices? How did they gain access to the various gentry networks that spoke in their defence? To what extent did lordly influence impact upon the composition of each witness list? How well did the witnesses themselves know each other? What role did bonds of regional solidarity play before the Court? Perhaps most significantly, what does the testimony itself reveal about the chivalric culture of the age? These questions enable the historian to probe in considerable depth the character of gentry military society, and its chivalric ethos, at a time when the victories of Edward III (1327-1377) were receding ever deeper into popular memory and the triumphs of Henry V (1413-1422) still lay in the future. PHILIP CAUDREY is an Honorary Research Associate at the University of Tasmania, Australia.

Forfattere
Bibliotekernes beskrivelse An investigation into three of the best-known cases tried under the Court of Chivalry reveals much about gentry military society.