Migs in the Middle East Volume 1 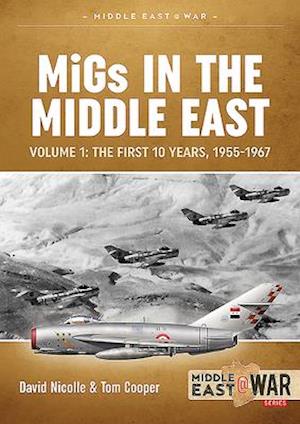 Egypt and Czechoslovakia signed the so-called 'Czechoslovak Arms Deal', thus initiating a unique era of close cooperation between major Arab military powers, the former Union of the Soviet Socialist Republics (USSR) and its allies. During the first decade of this period, the air force of Egypt, followed by those of (in chronological order) Syria, Iraq, Morocco and Algeria, were all equipped with dozens and then hundreds of Soviet-made fighters designed by the Mikoyan I Gurevich Design Bureau - the same swept-wing jets that took the Western powers by surprise during the Korean War.While the first generation of MiG jet fighter - the MiG-15 - saw only a relatively brief service in Egypt, its more efficient and uprated successor, the MiG-17F, entered service in bigger numbers, and then formed the backbone of additional air forces around the Middle East. The MiG-17PF became the first radar-equipped combat aircraft while the MiG-19 became the first supersonic fighter flown by the air forces of Egypt and Iraq, in the period 1958-1963. In Morocco and Algeria, the MiG-17 was the first and the only jet fighter in service during the first half of the 1960s.Unsurprisingly, MiG-15s, MiG-17s and MiG-19s thus served with many different units and - especially in Egypt and Algeria, and also in Syria - wore a wide range of very different, and often very colourful unit insignia and other markings. They were also flown by many pilots who subsequently played crucial roles in the future of their nations.Based on original documentation and extensive interviews with veterans, and richly illustrated, MiGs in the Middle East, Volume 1 is a unique source of reference on the operational history of MiG-15, MiG-17, and MiG-19 fighter jets in Algeria, Egypt, Iraq, Morocco, and Syria from 1955 until 1956. This is the first volume in a mini-series.

Forfattere
Bibliotekernes beskrivelse An exclusive source of reference on the operational history of MiG-15, MiG-17, and MiG-19 fighter jets in Algeria, Egypt, Iraq, Morocco, and Syria from 1955 until 1965. This is the first volume in a mini-series. 100 photos, 6 maps, 18 colour profiles