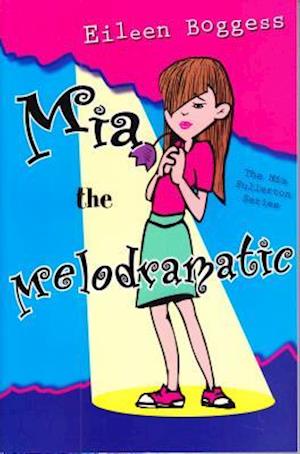 Mia is fifteen and during her summer vacation she starts working at a children's playhouse, meets new people (including Eric, who she knew once long ago when he was not so interesting) and continues sibling warfare with her younger brother Chris.

Forfattere
Bibliotekernes beskrivelse Summer has finally arrived, but Mia Fullerton doesn't have much to celebrate. Her best friend, Lisa, is spending the summer at a Mensa camp, and her boyfriend, Tim, will be at his grandparents' house in Maine. So, stuck with a choice of spending the next two months hanging out with her younger brother, Chris -- who has declared a prank war on her -- or taking a job on the stage crew at a local children's theatre group, Mia chooses the lesser of two evils and begins working at Little Tyke's. The moment she meets the other student members of the stage crew, Mia realises she's not at St Hilary's anymore. There's Zoe, a Goth punk rock singer with fifteen facial piercings; Henry, a caffeine addict with the self-declared ability to predict people's coffee preferences; and Eric, a former childhood friend who's definitely outgrown his shy ways and geeky appearance. At first, Mia's mortified when she's forced to perform for audiences dressed as Playtime Pal -- the clown who introduces the plays -- or be a last-second stand-in for a kid who's just tossed his cookies on stage (after she has cleaned it up, of course) or is abruptly hauled off for a family vacation.But as the summer progresses, Mia realises something very strange -- she actually enjoys acting! As Mia begins to explore this less meek version of her former self, Tim does something that destroys her trust in him and shatters her heart. This act of betrayal ultimately sends Mia into the arms of the easy-going, Adonis-like, and very willing Eric. And when the summer comes to an end, bringing Tim back into her Des Moines, Iowa life, Mia has a tough decision to make: Should she return to Tim and her former shy ways, or should she continue to let this new Mia grab some limelight of her own? In this sequel to the much-loved Mia the Meek, readers will again enjoy spending time with Mia Fullerton, watching as she navigates the next stage of adolescence, one humorous and memorable fiasco at a time.