- One Rivalry, Two GOATs, and the Era That Remade the World's Game 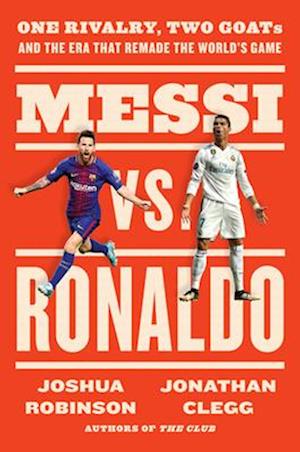 Wall Street Journal reporters Joshua Robinson and Jonathan Clegg offer a deeply reported account of the intertwined sagas and legacies of two of the greatest soccer players of all time-Lionel Messi and Cristiano Ronaldo-examining how their rivalry has grown from a personal competition to a multi-billion-dollar industry, paralleling the stunning rise, overwhelming excesses, and uncertain future of modern international soccer.For over fifteen years, almost any conversation about international soccer has always come back to two players-Lionel Messi and Cristiano Ronaldo-undoubtedly the greatest of their generation but with styles, attitudes, and fanbases that couldn't be more different. For millions of people around the world "Messi or Ronaldo?" isn't simply a barroom argument, or an affirmation of fandom, so much as a statement of philosophy, of values, of what global soccer is today and of what it will be tomorrow.Now Wall Street Journal reporters and co-authors of The Club, Joshua Robinson and Jonathan Clegg, unite the stories of Messi and Ronaldo into a single modern epic of global sports, detailing how one rivalry changed both the game and the business of international soccer-forever. Based on dozens of firsthand accounts and years of original reporting, Messi vs. Ronaldo weaves together the stakes, color, and characters at the heart of each man's story, going inside the locker rooms and boardrooms where their legends were forged and revealing off-field drama as gripping as anything that happened on it. From their contrasting origin stories to their divergent career arcs and their conflicting reputations, these players have built their successes on opposite paths, yet each, in his own way, offers a riveting tale of triumph and excess. Taken together, their story embodies the astronomical growth of international soccer, how social media has revolutionized the power of sports celebrity, and how the desire to capitalize on the billions of dollars these players represent electrified some of the most storied clubs in Europe-Barcelona, Real Madrid, and Manchester United among them-and cost them almost everything.With the 2022 World Cup almost certain to be the last for both of these figures, Messi vs. Ronaldo offers a deeply researched look at their legacy and grapples with the impact that their talents have had on the game for better and for worse. Much more than a retelling of the dual accomplishments of these great players, this is truly a biography of a rivalry, one that has become a crucial lens for understanding the past, present, and future of global soccer.